What is a DNS zone?

Copy article link December 1, 2022
A DNS zone represents a portion of the DNS namespace owned and managed as a single unit by one organization. The global DNS is composed of many zones.

The most well-known zones are the DNS root zone, where the DNS begins, and the Top Level Domains (TLDs) such as .com, .net, .org, etc. Below the TLDs, virtually every recognizable brand with a presence on the Internet has its very own DNS zone. So, for example, individual DNS zones exist for google.com, wikipedia.org, bit.ly, and millions upon millions of other domains.

Where does a zone begin?

Every DNS zone begins at a specific name in the DNS. The DNS zone owns that name and all of the children of that name. For example, the .com TLD is a zone that begins at the name "com" and extends downwards to encompass all of the DNS names that end with ".com".

The DNS contains a special record at the start of each zone: the Start of Authority (SOA) record. This record signifies the beginning of a zone and contains some important metadata about the zone. All zones start with an SOA record.

And where does a zone end?

Each zone owns the name where the zone starts and of that name's children. But each zone's administrator can insert delegations to transfer, or "delegate", ownership to other zones.

In this way, the global DNS begins at the DNS root zone and flows downwards to different zones through delegations.

Let's consider a simple example zone file. The zone starts with an SOA record. There must also be two or more NS records at the root of the zone. And often MX records for mail delivery, and other records as well.

What names in the DNS belong to the example.org zone?

It's helpful to consider the DNS as a tree of names starting with the DNS root at the top and flowing downward. Each node in this tree represents one label of a DNS name. 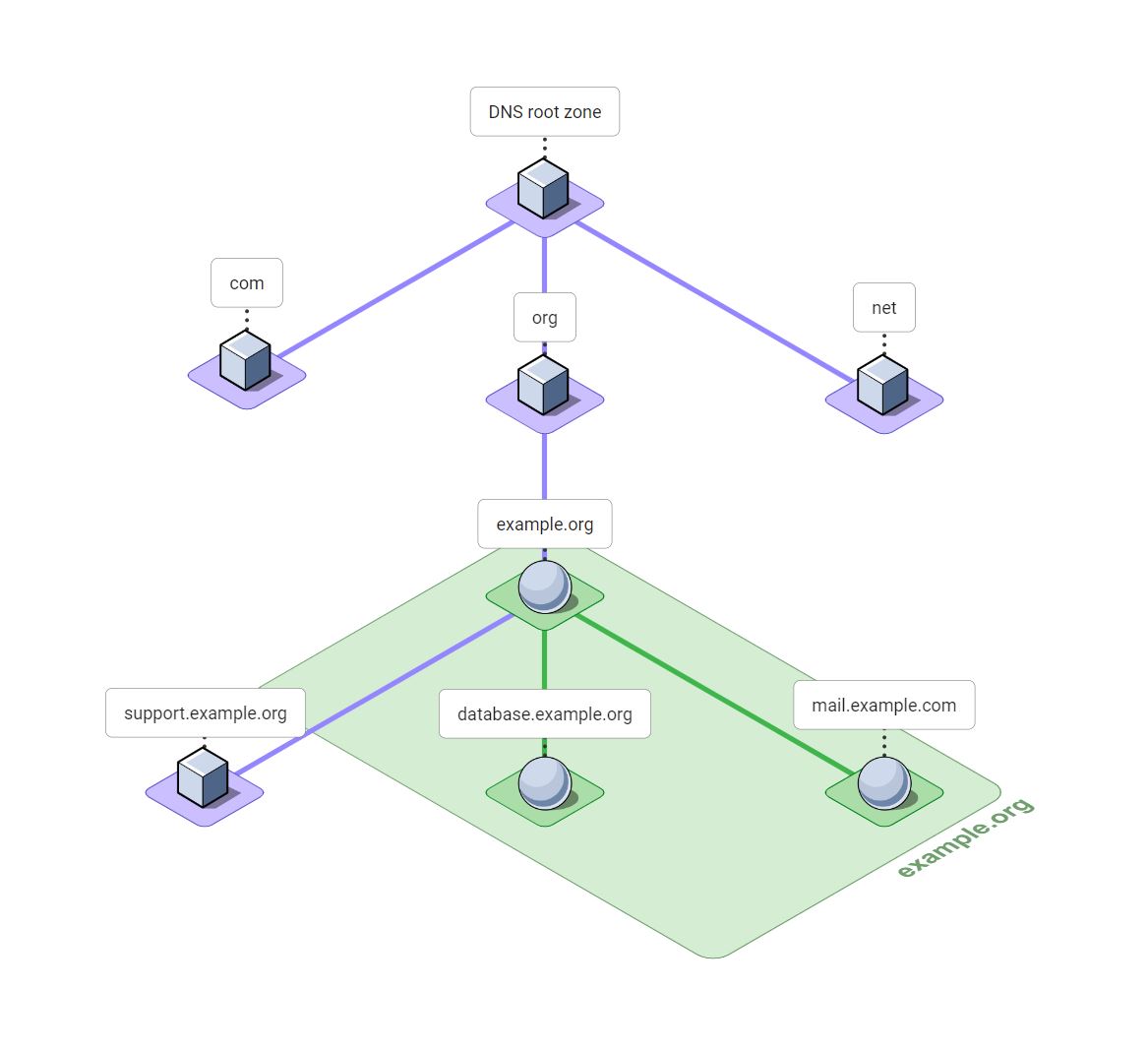 How do DNS lookups use DNS zones?

A DNS lookup occurs when a piece of software, such as a web browser, needs to map a DNS name to an IP address or another piece of DNS data. The result of a DNS lookup is often an IP address, but it may be something else. For example, a DNS MX record lookup is used to retrieve the mail servers for a domain.

A DNS resolver performing a DNS lookup for a typical name such as www.example.org will move through three DNS zones:

What is a DNS zone file?

What is DNS zone transfer?

How many zones can be involved in a single DNS lookup?