As their name suggests, authoritative DNS servers are authorities for a DNS zone. They store and serve all of the DNS data for the domain, usually to the entire Internet.

The data in a DNS zone consists of DNS records that allow clients to access resources for the domain. This will include A records and AAAA records for websites and servers, MX records to enable email for the domain, and other records. Every DNS zone must also include an SOA record and a set of the NS records.

Every DNS zone is hosted on multiple authoritative DNS servers for redundancy. Usually, four servers are used. Delegations in the parent zone tell the entire Internet how to find the authoritative servers.

Each authoritative DNS server may host a single DNS zone or many. There is no hard limit on the number of zones a single server can host. The authoritative DNS servers for a business might host several zones for different domains owned by the company. Cloud-scale DNS providers such as Amazon's Route 53 or Google's Cloud DNS host thousands of zones per server or more!

DNS queries may be generated by a web browser running on a laptop, an app running on a phone, or a mail server trying to deliver email. When an application needs to look up a name in the DNS, a DNS query is sent to a recursive DNS server.

The recursive DNS server may be automatically configured by the user's Internet Service Provider (ISP), or it may be part of the cellular carrier's infrastructure, or it may be a publicly available DNS resolver that the user has chosen to use.

The recursive DNS server then caches a copy of the answer and returns it to its client.

Each time a computer joins a wifi or wired network, one or more recursive DNS servers are set automatically.

The user of the machine, be it a laptop, phone, or server, can change the network settings to specify different recursive DNS servers instead of these default servers. One might use a different resolver for privacy, performance, DNS features, or personal preference.

How does recursion work?

Let's put recursive DNS servers and authoritative DNS servers together and look at how www.example.org would be resolved when a user browses to a website: 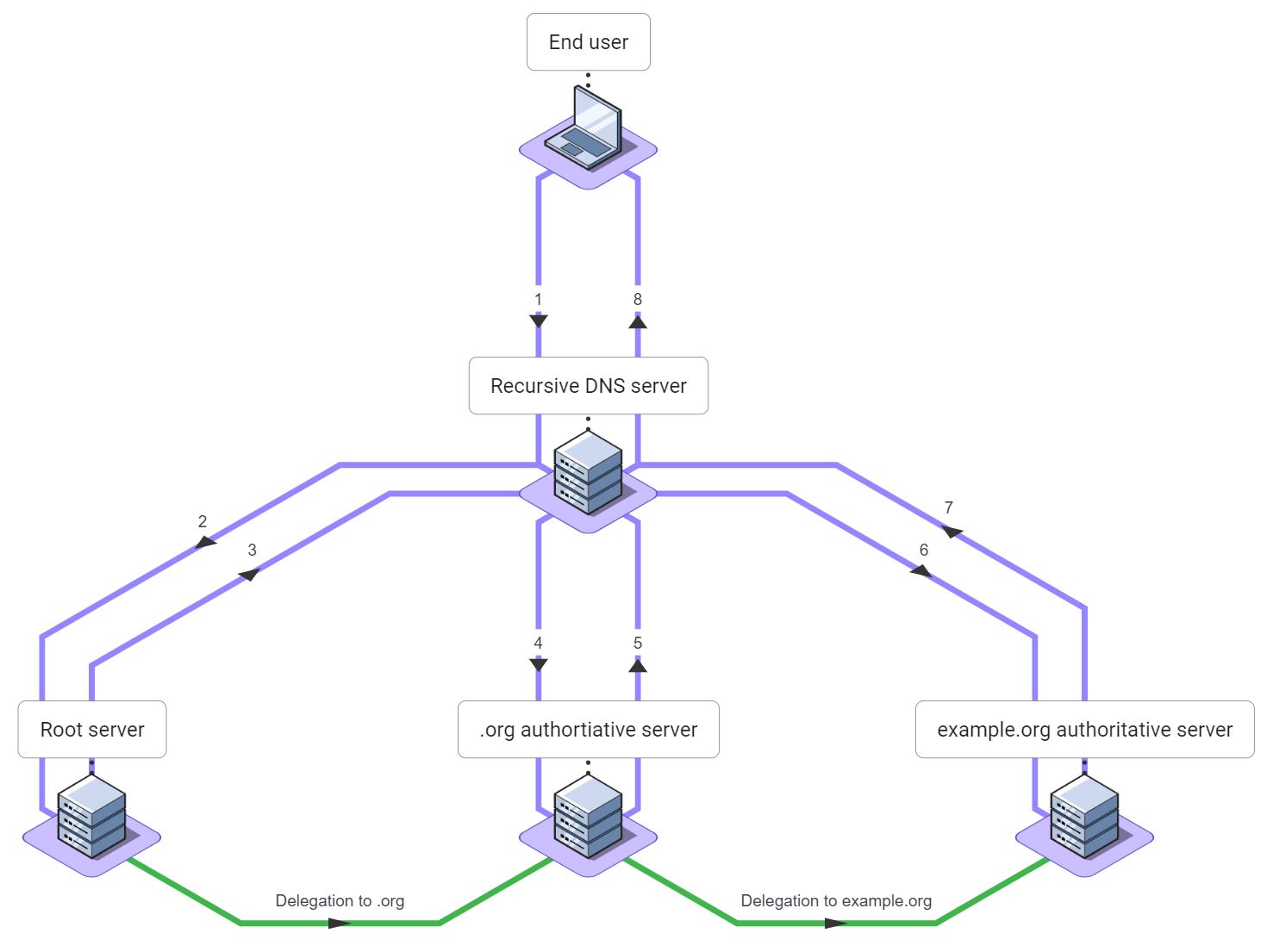 Caching in the DNS

The DNS was designed from the beginning to reduce the work and time required for recursion through caching. Caching is the process of saving a copy of a piece of data for a period of time to make subsequent lookups faster.

Caching is so critical to the DNS that every record in the entire DNS contains a Time-to-Live (TTL) value in seconds. The TTL of each record specifies how long that record may be cached.

The recursive DNS server caches the result of each query. If a second end user were to query for www.example.org within the answer's TTL, then the recursive DNS server would return the cached answer. It would not send any DNS queries to the authoritative servers. Caching serves three very important purposes in the DNS:

Can a DNS server be authoritative and recursive at the same time?

How can I tell if a DNS server is authoritative or recursive?